Clinical diagnosis can be influenced and delayed when patients with mental disorders cannot provide reliable medical history and cooperate with physical examinations, as well as their family members cannot evaluate the progress of the disease accurately. We present a case report of a female with schizophrenia who was admitted with convulsion and fever accompanied by skin ecchymosis of the upper limbs. She was initially diagnosed as “septic shock”, had been treated with antibiotics and fluid resuscitation in a local hospital for five days, and then was transferred to our hospital because of continuing confusion and low-grade fever. After repeatedly checking medical history and detailed physical examinations, the patient was eventually diagnosed as multiple fractures with the upper limbs and shoulders, and recovered a few days later after necessary surgical intervention.

Patients with schizophrenia are difficult to be communicated with and clear signs cannot be obtained easily through physical examinations for doctors. Accordingly, it is hard to make an accurate diagnosis with limited information provided by the patients and their family members. People with schizophrenia have elevated pain threshold, pain tolerance and sensory threshold compared to the controls, as well as reduced physiological response to noxious stimuli [1]. They are more prone to the osteoporosis and bone fractures due to their reduced social activity, malnutrition, smoking, alcohol abusing and low vitamin D levels [2-5]. Detailed medical history and thorough physical examinations are necessary for doctors to avoid possibly wrong diagnosis and misguided treatments. We present a case report identifying the process of diagnosis and treatment for a patient with fever and skin ecchymosis. The case report clearly shows that the patient’s past history of schizophrenia should be taken into account.

A 66 year old woman was admitted to the department of emergency with convulsion and confusions for five days. The generalized convulsion began acutely after lunch, with clinical manifestations of frothing at the mouth, muscle rhythmic jerking and urinary incontinence, and it was self-limited but followed by drowsiness and confusion. She was immediately sent to a local hospital with 37.8°C, 112 beats/min, 22 beats/min and 70/40 mmHg for her body temperature, pulse, respiratory rate and blood pressure, respectively, on admission. The patient was then initially diagnosed as “septic shock” and received treatments of antibiotics and fluid resuscitation in the local hospital. She underwent lumbar puncture twice without any abnormal result of cerebrospinal fluid (CSF) test. After the treatment for five days, no convulsion was observed even without any anti-convulsive treatment, and meanwhile the blood pressure returned to normal. With confusion and low-grade fever remaining with the patient, she was transferred to our hospital after five days treatment in the local hospital. The patient had a history of schizophrenia and had been taking Risperidone for 20 years. She lost social communication capacity due to carbon monoxide poisoning one year ago. The family members of the patient denied illicit drugs abusing (intravenous or otherwise). There was no past history of trauma and operation. Her vital signs were normal except with a body temperature of 37.5°C, pallor in face and conjunctiva, and skin ecchymosis in upper limbs and more seriously in elbows on admission. It was clearly noted that the patient had cervical and thoracic hyperhidrosis, and her upper limbs crossed on her chest without any active movement. Her cranial CT and chest CT showed none of special abnormalities. Blood examination found reduced erythrocyte count (2.07 × 1012/L) and hemoglobin concentration (65 g/L). She was taken physical examination thoroughly and found a large area of skin ecchymosis in the shoulders and napex (Figure 1). The edge of the lesion had partially faded away and the skin ecchymosis turned yellowish in some areas (Figure 1). The upper limbs were restricted in flexion position, and the left upper limb had higher muscle tension compared with the right side. She was found nervous, painful and much more cervical and thoracic hyperhidrosis when her upper limbs were moved passively. The family members were interviewed for the medical history of the patient, which revealed that she had fall 20 days ago and consequently she displayed limited movement of the upper limbs. However, no medical examination and treatment had ever been administrated before admission to the local hospital. X-ray measurement confirmed osteoporosis, bilateral humerus neck fractures, dislocation of the left shoulder joint and subluxation of the right shoulder joint (Figure 2). Three dimensional (3D) reconstructions after CT scan of the shoulder showed comminuted fractures and dislocation of bilateral shoulders (Figure 3). The patient was then transferred to the department of orthopedics for further treatment. 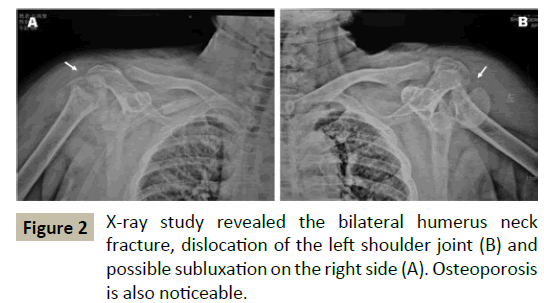 Figure 2: X-ray study revealed the bilateral humerus neck fracture, dislocation of the left shoulder joint (B) and possible subluxation on the right side (A).Osteoporosis is also noticeable. 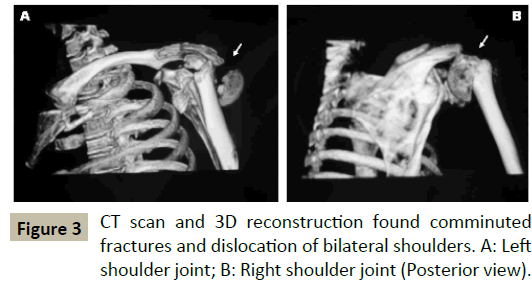 Doctors have to make accurate diagnosis from any medical conditions, which is essential to explain all the clinical manifestations and laboratory tests. Otherwise the following management may be inappropriate. In this case, the initial diagnosis of “septic shock” was not fully supported by manifestations and examinations and resulted in failure in antibacterial treatment. The convulsion was probably due to the low blood pressure resulting from the hemorrhage shock, and never attacked the patient again after admission. For patients with schizophrenia have decreased pain sensitivity and reduced physiological response to noxious stimuli [1], doctors’ attention could be easily attracted by the medical history of long-term Risperidone administration, whose side effects often include epilepsy, rigidity and hypotension and thereby high likelihood of fall. The shoulder fracture initially due to the fall without prompt treatment 20 days ago may also be ignored. The probable recurrence of epileptic seizures could worsen the bone fracture and cause injury of the soft tissue and ecchymosis of the skin, which could aggravate the hypotension. Moreover, the continuing subcutaneous bleeding would keep resulting in ecchymosis of the skin, anemia, absorbing fever, and leukocytosis, which was inflammatory response from trauma. Therefore, we suggest thorough history collection from the family members of the patient, which might provide us new clues. In this case, when the large area of skin ecchymosis was found on the shoulders and napex without significant abnormality such as coagulopathy and obvious injury, bone fractures should be excluded, especially, under such condition that patients failed to cooperate with the physical examination properly. Skin ecchymosis is recognized as an indirect signs of the closed fractures [6]. However, it is rare to present on such a large area of the skin, which even lead to the hemorrhagic anemia and hypotension mainly due to the repeated injury from the bone fracture. In addition, more attention should be paid to the side effects of Risperidone, which also causes osteoporosis and fractures [6-9]. Above all, decreased pain sensitivity among people with schizophrenia indicates that difficult recognizing pain was an issue for doctors, and also healthcare staff. Thorough physical examination, detailed medical history taking and necessary lab tests should be combined together for patients with mental illnesses.

When the initial diagnosis could not explain all the manifestations of a patient and responding treatment could not relieve signs and symptoms thoroughly, detailed examination and history inquiry should be conducted. Additionally, patients with schizophrenia should be examined carefully for hidden bone fractures, especially when they are either complicated with skin ecchymosis or administered with oral Risperidone for a long period.

The authors would like to extend their gratitude to the patient and her family members for help in completion of this article.