Background: The well-established scientific observation has shown that the process of sensing and making adaptive response to external stimuli in bacteria is regulated by the two-component signal-transduction systems (TCSTSs). Typical TCSTSs are composed of two different types of proteins, a histidine kinase (HK) and a response regulator (RR). This review focuses on the influence of TCSTSs on the virulence, competence, biofilm formation and antibiotic resistance, and further discusses the value of TCSTSs for the new drug targets.

Methods and findings: The HK protein is responsible for response to external stimuli by autophosphorylation, subsequently transfering this phosphate group to the RR protein, so then activating a series of biological processes. Loss of function or genetic mutation of these systems has been reported to study the function of the two component systems. It suggests that this system can regulate the expression of virulence factors, control the competence for transformation, modulate biofilm formation and cell envelope stress response, and influence the susceptibility to antibiotics.

Conclusion: The homologies of HK and RR proteins in different genera of bacteria are highly conserved respectively, especially in the residues located near active sites. Moreover the signal transduction in mammals has an entirely different mechanism compared with bacteria. Altogether, this system may be very suited as a good potential drug target for the development of novel antibacterial.

Bacteria are wildly spread in nature, and some of them are human pathogen. To survive or even persistently infect in several intricate host environments, bacteria need adapt to the environment. Organisms are able to sense environmental signals and transduce the signals to the intracellular to initiate the process of transcription, translation, protein expression, modification and other biological processes of related genes. The process of sensing the environment and making adaptive response to external stimuli is often mediated by two-component signal-transduction systems (TCSTSs). The signal transduction system is activated by external stimuli including temperature, nutrients and pH [1].

Two component systems are very common in nature. This system has been considered to be restricted in prokaryotes for a long time. However, the emerging evidences indicate that this system also exists in many eukaryotes, including yeast, fungi, slime molds, and higher plants. But the system so far has not been found in vertebrates. It is firstly identified by Ninfa and Magasanik when they studied nitrogen regulatory protein of Escherichia coli ( E. coil) in 1986 [2]. Meanwhile, in 1986 Nixon found that there were many sensory systems in bacteria. By comparing the amino acid sequences, they found that these sensory system components were similar to the nitrogen regulatory system of E. coil [3].

Representative TCSTS consists of two different types of protein, a histidine kinase (HK) and a response regulator (RR). The HK is responsible for responding to external stimuli by autophosphorylation, subsequently transfers this phosphate group to the RR. This phosphorylation changes the characters of RR protein and enables the RR to bind to the promoter region of target gene(s), functioning as a transcriptional factor [4] (Figure 1). These signal transduction pathways need phosphorylase to dephosphorylate and restore the unstimulated state of RR, thus the system can respond to the external stimuli again. The phosphorylase can be a histidine kinase itself, a response regulator, or one of the other proteins.

Based on genomic sequencing, a lot of gene families have been identified. The two component system gene is firstly demonstrated by this method. Researchers have made extensive studies on various two component systems, particularly which plays an important role in cell physiology, information transfer, and individual growth in bacterial pathogens. Moreover two component systems have been shown in a number of cases to regulate virulence factors, which are crucial for the pathogenicity of many bacterial species [5], competence [6], biofilm formation [7-9] and cell envelope response [10], and antibiotics resistance [5] (Figure 2). Indeed, reports have shown that inhibitors of two component systems have good antibacterial activity [11]. Two component systems have four similar characters which may make the system to be a good potential target for antimicrobials. The characters are as follows: ? The HK and RR proteins have significant homology respectively in different genera of bacteria, especially in the residues residing near active sites [12]; ? The two-component signal transduction system can regulate the expression of the pathogen essential virulence factors that are required for survival in the host use to regulate of essential virulence factors [13-15]; ? There are many two component systems in bacteria, and some are vital for viability [16,17]; ? The signal transduction in mammals has an entirely different mechanism. Taken together, this family of proteins may be very suited as a target for the development of novel antibacterials.

The HK is located in the cell membrane and usually has one or more transmembrane regions. The HK forms a dimer to fulfill functions and its C-terminal contains a hist???idine kinase domain (about 200 residues). Autophosphorylation process happens in this domain and the phosphorylation sites are generally conserved histidine residues. The sequence alignment showed that this domain has five unique conserved regions: H, N, D, F and G [12]. One module that can sense the external signal is named as input module and is connected with histidine kinase domain. The N-terminal of HK is very different, usually comprising several transmembrane domains. A linker connects the histidine kinase domain and the transmembrane domain (Figure 2B). These structure features make the HK can sensitively sense the change of the external environment.

The RR protein resides in the cytoplasm, and has a highly conserved receiver domain in its N-terminal region (about 110 amino acids) by comparing different RR proteins and an effector or output domain within the C-terminal part that can mostly bind DNA (Figure 2C). The phosphorylation sites are aspartic acid residues. Some of the RR proteins are transcription regulators. The signal transduction process is composed of the signal input, histidine autophosphorylation, response regulator protein phosphorylation and signal output component. 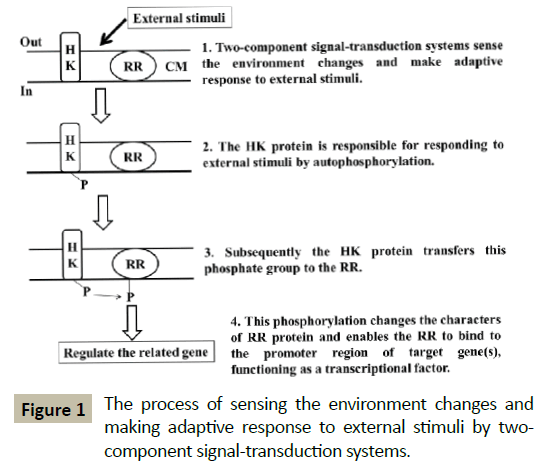 Figure 1: The process of sensing the environment changes and making adaptive response to external stimuli by twocomponent signal-transduction systems. 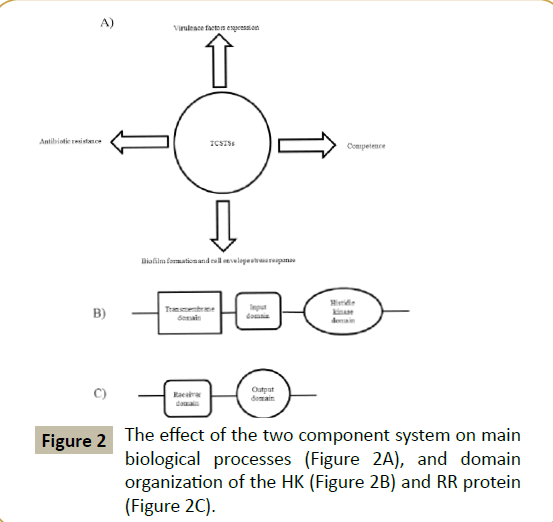 Figure 2:The effect of the two component system on main biological processes (Figure 2A), and domain organization of the HK (Figure 2B) and RR protein (Figure 2C).

Two component systems, named ComDE and HK/RR11, have been shown to be involved in biofilm formation. Loss-of-function mutation of hk11 or rr11 leads to defects in biofilm formation, which presents reduced biomass, sponge-like architecture with large gaps, and longer chains composition of cells than those of the parent biofilm in S. mutans [7-9]. Maintaining integrity of cell envelope is crucial for bacterial survival. As reported, the two component system LiaRS of Bacillus subtilis is a part of the regulatory network of cell wall stress response and is critical for maintaining integrity of the bacterial cell wall [48]. LiaR can regulate cell wall synthesis, pili formation and cell membrane modification in group B Streptococcus (GBS) [49]. And the VicRK system modulates several genes associated with cell membrane and cell wall homeostasis in S. pneumoniae [10]. The liaFSR genes mutations lead to the susceptibility to Lipid II cycle interfering antibiotics and chemicals that influenced the cell membrane integrity. Significantly, the LiaFSR system is reported to activate transcription of several genes participating in membrane protein synthesis, peptidoglycan biosynthesis, envelope chaperone/ proteases, and transcriptional regulators under bacitracin stress conditions. These findings demonstrate that LiaFSR system can sense cell envelope stress and preserve envelope integrity in S. mutans [50]. These data demonstrate that two component systems participate in biofilm formation and cell envelope response of bacteria.

The deletion of LiaR is more sensitive to cell wall-active antibiotics (vancomycin and bacitracin) and antimicrobial peptides (polymixin B, colistin, and nisin) compared to wild-type GBS. And mouse models of both GBS sepsis and pneumoniae with LiaR mutant GBS significantly attenuates, suggesting that LiaR controls expression of genes associated with microbial defense against host antimicrobial systems [49]. A LiaR deletion mutant results in reversion of daptomycin and telavancin resistance, as well as leads to hypersensit???ive to these antibiotics and several antimicrobial peptides, indicating that LiaR is a major regulator to control the cell membrane in response to different antibacterial agent and polypeptide in daptomycin-resistant Enterococci faecalis [51]. A T/A deletion mutation of CiaH, resulting in a truncation protein, reverse the resistance to cefotaxime in S. pneumoniae [5,45]. And CiaRH mutants have high defense against the effect of cell wall inhibitors, including cycloserine, bacitracin, and vancomycin, as well as less sensitive to these drugs [52]. LiaRS of Listeria monocytogenes (L. monocytogenes) can be activated by the antibiotics which act on the cell wall, LiaR phosphorylation level is controlled by the LiaS group of protein kinase and phosphatase dual activity. Phosphatase activity of LiaS in the absence of cell wall stress is activated by LiaF [53]. The transcription of LiaR gene is increased in L. monocytogenes under salt stress. And LiaR mutation strains are markedly more susceptible to nisin in comparison with the salt-induced nisin resistance of wild-type strains, suggesting that LiaFSR results in cross-protection and resistance to nisin [54]. These reports manifest that the two component system plays an important role in antibiotic resistance of bacteria.

The results discussed above suggest that the two component signal system is very vital to bacteria, involving in the regulation of virulence factor expression, the control of competence, modulation of biofilm formation and cell envelope stress response, and antibiotic resistance. Bacteria are wildly found in nature and two component systems are widespread in bacteria. There are significant homologies between HK, RR proteins and different genera of bacteria respectively, especially in the residues located near active sites. Furthermore the signal transduction in mammals has an entirely different mechanism compared with bacteria. Moreover inhibitors of two component systems have been proved that they have good antimicrobial activity. Altogether, this system is potentially very suited as a good drug target for the development of novel antibacterials. As such, studies on the regulation mechanism of this system on virulence, competence and antibiotic resistance have great significance.